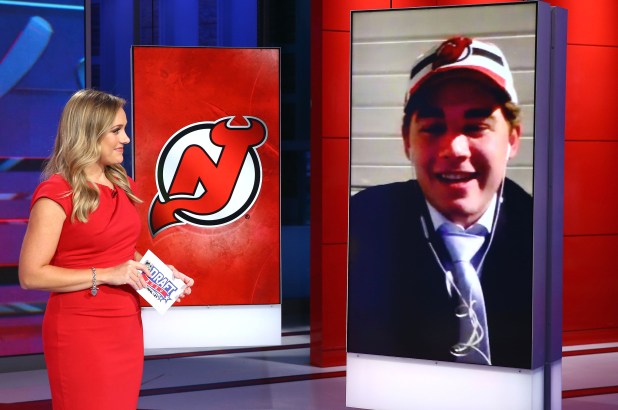 With three first-round picks for the first time in franchise history, the Devils selected two forwards and one defenseman in the 2020 NHL Draft on Tuesday night.

The Devils got their eventful night started by taking Swedish winger Alexander Holtz with the seventh-overall pick before selecting forward Dawson Mercer at No. 18 and defenseman Shakir Mukhamadullin at No. 20.

Holtz, who Devils general manager Tom Fitzgerald referred to as “the best goal scorer in the draft” last week, is a strategic selection for an offense that ranked 24th in scoring last season.

“I talked with the Devils a lot, when they had their pick on the clock, of course I was nervous but when they called my name it was an incredible feeling,” Holtz said on a Zoom call Tuesday night. “I can’t really describe it.”

Fitzgerald made it clear that his goal was to add talent that is on pace to reach its prime at the same time as former first-overall picks Nico Hischier and Jack Hughes.

And Holtz, who said his best assets are in the offensive zone, couldn’t hide his excitement at the thought of playing alongside both young cornerstones of the organization.

“I think when you have that kind of center that has the ability to play the puck, see the ice very well and a scoring winger, it makes good chemistry,” he said.

The 6-foot right winger also has a familiar face waiting for him inside the Devils locker room in 22-year-old Jesper Bratt. Holtz said the two shared a personal trainer for a couple of summers and that he’s excited to take the same flight as Bratt to New York.

Mercer, meanwhile, has the potential to become a top-six forward. He is capable of playing in different situations, has very good hands and can easily beat defenders in one-on-one situations. He’s versatile with his slap shot, one-timer and backhand and his shots feature a quick release that make them even more effective.

“When New Jersey finally called my name at 18, I was pretty pumped and excited,” Mercer said. “It’s a great organization to go to. They have a lot of young prospects and I think the team has a bright future ahead of themselves.”

Fitzgerald capped off his draft night by adding a 6-4 defenseman that is known to be an excellent skater for his size. Mukhamadullin has the agility and edge-work that usually don’t come with a player of his stature, but he is able to play a 200-foot game where he easily transitions from offense to defense.

The Devils will now have an opportunity to bolster their lineup even more when free agency begins Friday at noon. And with more than $26 million in cap space, Fitzgerald has plenty of room to continue building.

A look at the Devils’ three top-20 picks in the first round of Tuesday’s NHL draft:

The skinny: A scoring threat from anywhere in the zone, Holtz is considered to be a pure sniper who is primed to be a first-line finisher who can capitalize on the power play. His stellar wrist shot and lightning-quick release make him the kind of player opponents are instructed to never leave alone on the ice. No stranger to the international stage, Holtz played on the Swedish teams at the Hlinka-Gretzky Cup, scoring two goals and seven points in five wins to help his team win silver. At the U17 World Hockey Challenge, Holtz recorded eight points in six games to take home a bronze medal. He posted seven points in seven games to win a gold medal at the 2019 IIHF Under-18 World Championship.

The skinny: A player who can dismantle defenses with a wide array of false signals and tricks to throw defenders off, Mercer can beat almost anyone in one-on-one situations. He is known to be a hard worker with excellent lower-body strength that will bode well for him at the next level. He has good hands, speed and agility to go along with an above-average wrist shot.

The skinny: For a 6-foot-4 defenseman, Mukhamadullin can skate well and has a cannon for a one-timer. Although he has some issues with controlling his shot, Mukhamadullin has good ice vision and can make smart plays from the point. He handles the puck well and is poised at the line, which allows him to move laterally and open up shooting and passing lanes. Mukhamadullin can use his size to battle along the boards and in front of the net.