A look inside Islanders’ new home as construction continues 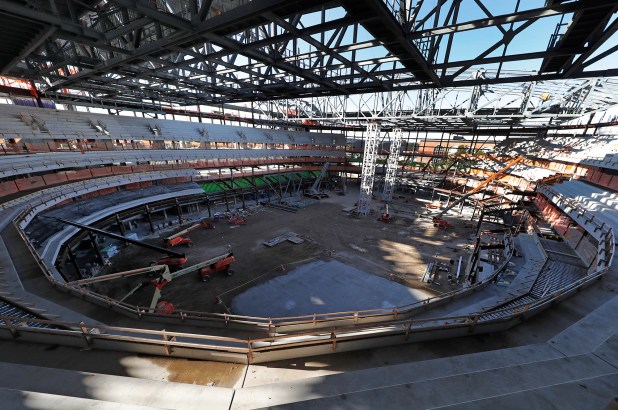 The Islanders’ new home is just two months away from having its roof put on and just more than a year away from hosting hockey games in November 2021.

But to Isles fans who have endured the torturous two-arena debacle for the past five years, it must still seem too good to be true.

“A few months ago, there were still Islanders fans that were still like, ‘There’s no way this is happening.’ But I promise you, it’s happening,” Tim Leiweke, the CEO of Oak View Group, said Thursday as he adjusted the Islanders hardhat perched on his head.

The buzzing construction scene along Hempstead Turnpike proves that UBS Arena is indeed coming to life. The complex — which is privately funded by New York Arena Partners, a joint venture among the owners of the Islanders, the Wilpon family’s Sterling Equities, and Leiweke’s Oak View Group — is said to be a $1 billion project.

Though Leiweke said that with a 250-room hotel and 250,000 square feet of retail on 43 acres of state-owned land, things come out closer to around $2 billion. Not including the building, the campus itself cost $220 million.

But you can see Leiweke’s confidence in his investment by the way he talks about it. Plus, the Islanders’ recent splash into NHL relevancy has made it that much easier to believe in. When the pandemic hit in March, an expansive marketing campaign for the arena had to be put on pause, and Leiweke was worried things were going to be crunched into a 10-month window to sell inventory.

“We’re halfway sold out, and that shocked me the most,” Leiweke said. “A lot of the credit goes to Lou [Lamoriello] and Barry [Trotz], because the team generated such a buzz and we were able to ride that buzz.”

Leiweke and Lamoriello go way back. In 2012, when Leiweke was the president and CEO of Anschutz Entertainment Group that owned the Kings and Lamoriello was general manager of the Devils, the two went head-to-head in the Stanley Cup finals. They were also on the NHL’s Executive Committee together.

Lamoriello had a lot of input in how UBS Arena is going to pan out, according to Leiweke, who said he always wanted to work alongside the GM of the year throughout their 30-year long friendship. Now that they have the chance, with Trotz at the helm of the Islanders, Leiweke said he would “bet on them all day long.”

“When we showed Barry the arena, he was like, ‘good, great, get this done and I’ll take care of the rest.’ ”

NFL Power Rankings for Week 7: Believe in the Bears

Giants are about to face a very different Eagles team