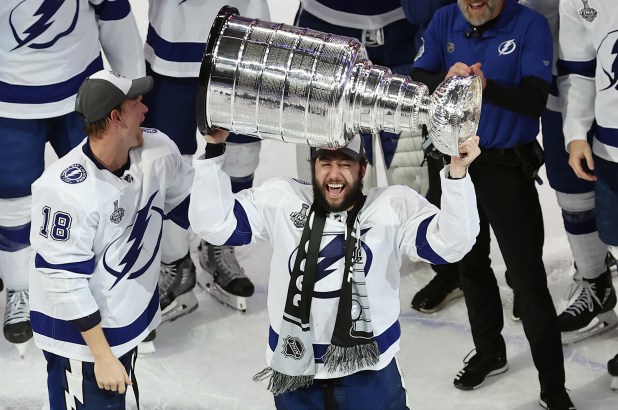 Tyler Johnson, lifting the Stanley Cup, was put on waivers by the Lightning on Friday.
Getty Images

The Tampa Bay Lightning got their day started by placing center Tyler Johnson on waivers. Johnson, who recorded seven points (four goals, three assists) in 25 playoff games as the Lightning won the Stanley Cup this year, has a full no-trade clause, but that doesn’t hold the Lightning back from placing him on waivers. Only a no-move-clause can prevent that.

The 30-year-old Johnson has been with the Lightning his entire NHL career, signing a three-year, entry-level deal in March 2011 after going undrafted. In 2019-20, Johnston posted 14 goals and 17 assists in 65 games.

Additionally, left winger Pat Maroon and defenseman Luke Schenn both agreed to deals to return to Tampa Bay. Maroon, who collected 23 points in 64 games in 2019-20, reportedly signed a two-year deal with a $900,000 cap hit, according to TSN. Schenn reportedly agreed to a one-year contract at $800,000. The Lightning also added defenseman Andreas Borgman and former Islanders goalie Chris Gibson on one-year, two-way contracts.

TSN also reported Friday that the Lightning were actively working to move defenseman Braydon Coburn, who has one year left at $1.7 million on a deal that has a no-trade clause.

One player Tampa Bay did lose was defenseman Kevin Shattenkirk. He signed with the Ducks on a three-year, $11.7 million contract after winning the Cup with the Lightning. The 31-year-old signed the one-year, $1.75 million deal with Tampa Bay after the Rangers bought him out following a disappointing 2018-19 season when he registered just two goals and 26 assists in 73 games.

Chiefs vs. Bills line, prediction: Patrick Mahomes will be too much

Grim outlook for Black-owned businesses in need of federal aid