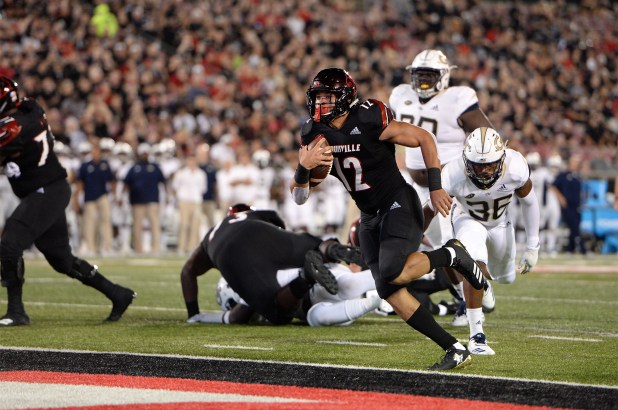 Louisville running back Trey Smith runs into the end zone against Georgia Tech in 2018.
Icon Sportswire via Getty Images

Louisville had one of the biggest turnarounds in college football in 2019 posting an 8-5 season under then first-year head coach Scott Satterfield (2-10 in 2018). However, the Cardinals are not sneaking up on anyone this season and already have lost two ACC games — vs. Miami and two weeks ago at Pittsburgh. Against Miami, Louisville was beaten by the big plays. Against Pittsburgh, Louisville was just beaten up. The Cardinals were not beaten up on the scoreboard in just a 23-20 defeat, but they were beaten up front on both sides of the ball.

Louisville’s offensive line allowed seven sacks and 12 tackles for loss and that led to the offense gaining only 223 total yards, having only 10 first downs and going just 1-for-11 on third down. It was also a rough outing for junior QB Malik Cunningham (9 of 21, 107 yards, TD, 3 INTs) as he has already thrown five interceptions in just three games. Cunningham was carted off the field at the end of the Pitt game but has been cleared for this one.

Georgia Tech is in its second year of a rebuild under Geoff Collins. After opening with an upset win at Florida State, the Yellow Jackets got overwhelmed in the second half by UCF and followed that up with a deceiving 37-20 loss at Syracuse. Tech outgained Syracuse 453-357, including 275 yards on the ground (6.2 yards per carry) but turned the ball over five times (four interceptions by freshman QB Jeff Sims) and committed 15 penalties for 104 yards.

Although the Yellow Jackets are still transitioning from a triple-option offense to a more spread-based attack, they have found most of their success running the football this season (221 ypg, 15th in FBS). Nevertheless, Georgia Tech is going to need more consistency out of the passing game and Sims must cut down on his turnovers as he’s thrown eight interceptions in three games.

The Cardinals last played Georgia Tech in 2018 with the Yellow Jackets winning 66-31 at Louisville in Bobby Petrino’s disastrous final season. Louisville also has 25 players on its roster from Georgia, the largest cluster of out-of-state players on any roster in the ACC. Many of those players were Petrino recruits and remember that thrashing and now they get to come home for some redemption.

After playing ranked teams in Miami and at Pittsburgh, this is a drop in class for the Cardinals and looks like a spot for them to get right.