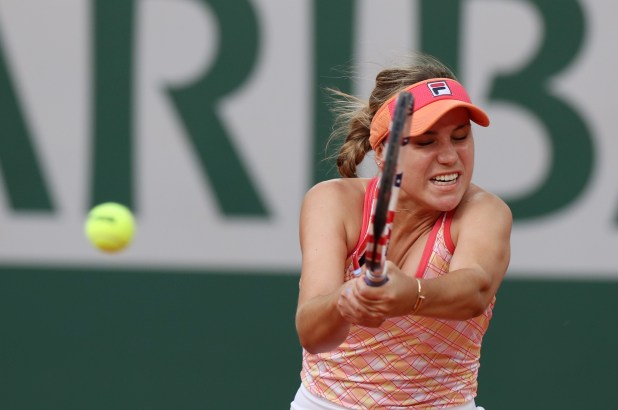 It took a “disaster” for Sofia Kenin to reach the French Open final.

The budding American star suffered a devastating 6-0, 6-0 defeat against Victoria Azarenka in Rome before arriving to the clay courts of Paris two weeks ago. It’s a defeat not every player recovers from quickly, and yet the resilient 21-year-old is a win over Iga Swiatek away from her second grand slam of the year.

The Moscow-born, former child prodigy told reporters she’s playing “even better” than she was at this year’s Australian Open — where she won her first grand slam in January  — after advancing at Roland Garros on Thursday.

“I was playing really well in Australia,” Kenin told reporters after defeating Petra Kvitova in straight sets in the semifinals. “Now I feel like I’m playing as good or even better.”

But the road to the women’s singles final at the French Open, originally scheduled to begin on May 24, hasn’t been easy for Kenin, who had not advanced past a fourth round at a grand slam prior to this year.

Kenin defeated former world No. 1 and hometown favorite Ashleigh Barty on her way to the title in Melbourne. She had just won her second title of the year in Lyon, France when everything came to a halt in early March and all major sports were suspended amid the coronavirus outbreak that had begun ravaging many parts of Europe.

Kenin, who had been playing the best tennis of her career, returned to her home in Florida where she found it difficult to keep focus, ESPN reports.

She sat and watched helplessly as the pandemic forced the cancellation of Wimbledon for the first time since the second World War, stripping her of the chance to capitalize on the momentum she had gained from her hot 2020 start.

“It took some time for me to get my motivation back,” the world ranked No. 4 said on Thursday after her win over Kvitova. “I finally got it. I feel like I’m playing the best tennis right now, as well.”

Kenin attributes her continued dedication to her father, who wanted her to keep her ready for when the time came to resume play.

“I’m always with my dad, and he’s my coach, and he just kept telling me, ‘You have to keep motivated, try to keep motivated,’” she told ESPN.com in July. “He really helped me through that. .. I just wanted to compete again.”

She stumbled out of the gate at her first tour event at the Western & Southern Open, losing her first match to Alize Cornet. She lost in the fourth round to 16-seed Elise Mertens in straight sets at the US Open.

Kenin will attempt to quell an improbable rise from Świątek, an unseeded 19-year-old from Poland, who has torn through the first six rounds of the tournament without losing a set. That includes defeating world No. 1 Simona Halep 6-2, 6-1 in the fourth round. The last time she and Świątek went head-to-head was in 2016 at the juniors tournament at Roland Garros, which Kenin lost.

“Losing I really hate, and I love winning,” she said Thursday. “I try to do everything I can to win. I want to be a champion, and I want to be No. 1 in the world.”