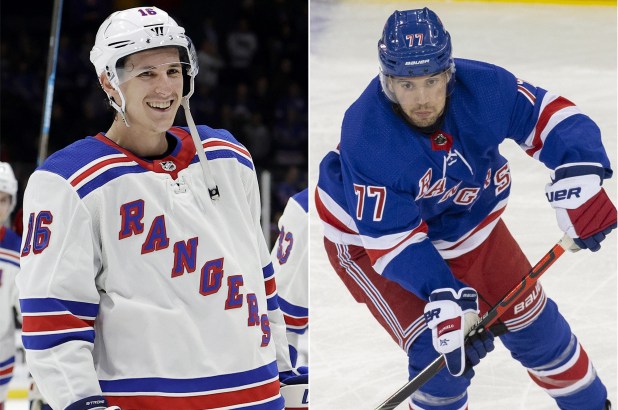 The Rangers were unable to come to terms with restricted free agents Ryan Strome and Tony DeAngelo, so now the two have filed for salary arbitration on the deadline for such moves, TSN Sports reported.

The first day of hearings is scheduled for Oct. 20, giving the Rangers time to trade one or both players, or for the cases go in front of an arbiter. The Rangers have extended qualifying offers to both players — DeAngelo, a 24-year-old defenseman and Strome, the Rangers’ third leading scorer — meaning they won’t lose them without any compensation.

Strome, a 27-year-old center, is coming off a terrific season, producing a career-high 59 points (18-41) as he teamed with Artemi Panarin on the team’s 1A/1B line.

Those numbers could backfire for the Rangers, though. Strome was a $3.1 million cap hit last year, but after arbitration those numbers could increase into the $4.75 million range. It is unlikely the Rangers would want to pay Strome that much. Then again, the center market is thin. Considering Strome will be an unrestricted free agent in a year, he could be used as an in-season trade chip, too.

As for DeAngelo, like Strome, he enjoyed a strong year. He produced 53 points — fourth among blue-liners — with a plus-12 rating. But he is said to be searching for a multi-year deal of at least three years and the Rangers added to their stable of defensemen on Friday by inking Jack Johnson and Anthony Bitetto and moving up in the first round of the draft to select Braden Schneider 19th overall.