Colts vs. Bengals prediction: Run with Indianapolis as your survivor pool pick 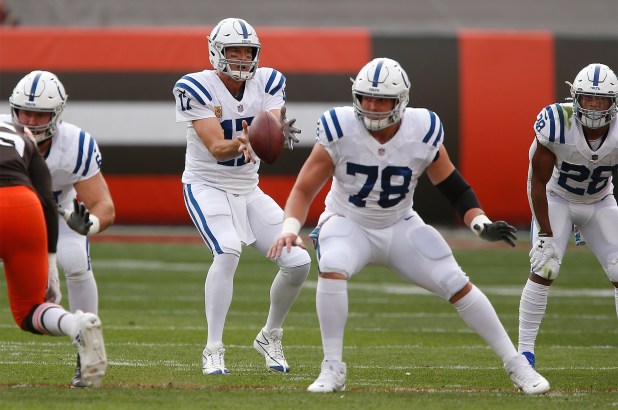 Colts quarterback Philip Rivers is seen in a game against the Browns.
Icon Sportswire via Getty Images

After a surprising run of weeks lacking upsets, Week 5 proved why survivor contests are tricky for even the most avid NFL aficionados. If you follow the league closely, you expect the unexpected, and last Sunday provided just that. Not only did a couple of major upsets occur in the light slate of games, we also saw a couple of near-misses.

Our choice last week in VSIN’s Point Spread Weekly, the Cowboys, needed a late field goal to tie and another field goal as time expired to beat the Giants, 34-31, as 9.5-point favorites. The Cowboys are not an appealing team on which to pin your survivor hopes, so using them and living to tell about it is an advantage going down the stretch.

Backers of the Super Bowl champion Chiefs cannot say the same. The Raiders pulled off the biggest upset of the season, 40-32, holding Patrick Mahomes and the Chiefs scoreless for most of the second half. Anyone in Las Vegas brave enough to back the hometown team strutted up to the window to cash a ticket that was +500 on the moneyline.

The other major upset was the Dolphins, getting about nine points for most of the week, not only eliminating 49ers backers but doing so in dominant fashion, 43-17. And those of you who felt safe trusting Russell Wilson with your selection — well, somehow, inexplicably, you lived to tell about it. After the madness of Week 5, let’s turn our attention to Week 6.

Patriots over Broncos: Bill Belichick and the Patriots (-7) off a loss with a whole bunch of extra time to prepare? Those are some intriguing angles to play, but there’s too much uncertainty for me to fire on this one. Drew Lock likely will be back, giving the Broncos at least an able-bodied quarterback. Cam Newton reportedly will return to practice on Thursday, but after missing close to two weeks due to COVID-19, what will his condition be if he plays? Not a bad pick, but let’s look for something a little safer.

Dolphins over Jets: For all the time we spend discussing ticket counts, line movements and sharp action, the best bet in football thus far has been whomever the Jets are playing. This is a subtly good chance to use a Dolphins (-8) squad that is improving. But is it still is a team you’re not excited to back, because how much can you really trust Ryan Fitzpatrick? It’s a division game, and one of only a few chances for the Jets to actually win (could they go 0-16?). A worthy choice, but I’ll pass.

Colts over Bengals: Philip Rivers’ arm strength, the bloated contract he was given and the notion that backup Jacoby Brissett gives this team a better chance to win are fair questions. The solution, at least for this week, comes to town in the form of the Bengals. Rookie Joe Burrow is accompanied by some playmakers who make this team fun to watch and give the Bengals a promising future. But “future” is the operative word. The Bengals are a mess on both sides of the ball, can’t protect Burrow and will get mauled by a physical Indy front that will be in a nasty mood coming off a thorough beating by the Browns. Bank on the Colts (8.5-point favorites) to bounce back in a big way.

Dodgers’ World Series bet came through, but Game 6 play did not

Teacher giving a virtual lesson heard a student’s grandma slurring. What she did next saved a life